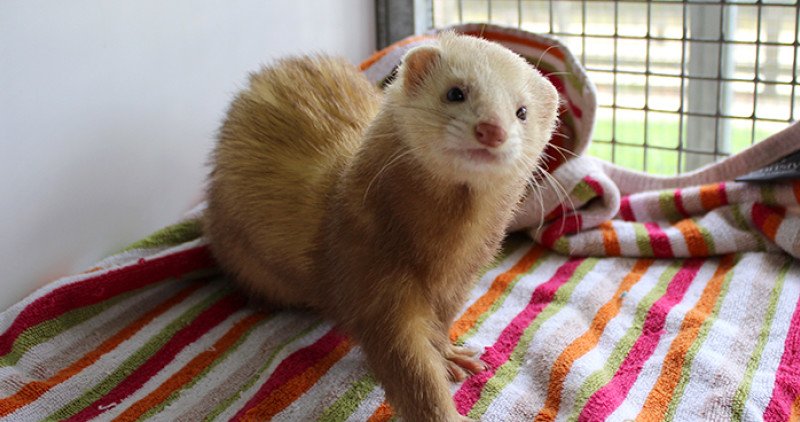 Your ferrets' health: what to look out for

Ferrets are generally healthy animals, but you may occasionally find your ferret needs veterinary treatment.

Make sure you find a ferret-friendly vet who has experience with them – and be prepared for unexpected vet bills if you don’t have insurance.

Ferrets generally live to between eight and ten years old.

Ferrets must be vaccinated against canine distemper. Ferrets are susceptible to it and it can often be fatal. Initial signs are discharge from the eyes and nostrils, a rash under the chin and groin and thickening of the footpads. Speak to your vet about when to vaccinate your ferret.

Diarrhoea can be fatal in ferrets, so make a habit of monitoring your ferrets’ poo every day. Diarrhoea can be caused by changes in diet – but if the diarrhoea is green or black, encourage your ferret to drink plenty and keep an eye on their general wellbeing.

If their poo remains this colour and the texture becomes loose or grainy for more than 24 hours – or you notice other abnormal behaviours, contact your vet straight away. The possible cause is ‘green slime virus’, also known as ECE or epizootic catarrhal enteritis, a very serious and highly contagious illness.

Extreme stress and a build-up of bacteria can bring on this potentially deadly disease. Diarrhoea can bring on dehydration quickly, so make sure your ferrets have easy access to fresh drinking water.

In some cases, your ferret may need admitting to the vets and placing on pain relief and fluids. A quick response really is key to your ferrets surviving this illness, so always seek advice even if they appear fit and well and just have a change in their poo.

It’s quite common for middle-aged ferrets to lose some of their tail hair – the reason for this isn’t completely clear, but it may be related to changes in the seasons. Sporadic hair loss is rarely anything to worry about, and you’ll find the hair grows again naturally within a few months.

You’ll need to consult your vet if symptoms persist or if the hair loss spreads to other parts of the body. Dramatic, widespread or symmetrical hair loss could be a sign of adrenal disease and will require veterinary support.

AGD was originally commonly found in the United States. However, it has recently become more common in the UK. Despite several studies, there is yet to be a proven cause of the disease although neutering has been linked in some cases.

Woodgreen are aware of this link and continue to keep up- to-date with the latest information. However, we still recommend neutering to prevent the ever-growing population of unwanted ferrets. Neutering also prevents other serious medical conditions such as anaemia and pyometra.

Symptoms of AGD in ferrets include:

A chemical implant is now available through your vet practice called ‘Suprelorin’ (Virbac Animal Health®). The implant can be used to prevent AGD in neutered ferrets and needs to be repeated every 18-24 months. If your ferret is suspected to have AGD, the implant can be used as a treatment.

The implant can also be used to chemically neuter ferrets as an alternative to surgery. The drug deslorelin has an effect similar to surgical neutering in reducing behaviour problems like fighting and ferret odour – but it will not prevent pregnancy.

Ferrets’ nails grow continuously, and you will need to clip them every four weeks or so once they are around six months old. If left unclipped, long nails can make walking very uncomfortable and lead to joint and back problems.

Nail clipping is a straightforward task, which is even simpler if someone helps you. One person should hold your ferret in a safe and calm manner and offer ferret paste as a distraction. Using a pair of small animal nail clippers, the other person will use one hand to hold the foot and the other to clip around 1 mm away from the visible blood quick.

Keep an eye on their weight

Your ferrets will appear to lose some weight and their coat will thin out in early summer – they will also grow into a slightly chubby ferret at the beginning of winter. This is perfectly normal and a response to the change in temperature. However, it’s important to prevent your ferrets from becoming obese. You should be able to comfortably fit one hand around their armpits when lifting them up.

Ferrets can be prone to dental decay, particularly if they’re fed a soft meat diet. Monitor your ferrets’ teeth from the age of three years onwards regularly for any signs of infection, unpleasant breath or damaged teeth. Like cats and dogs, ferrets will often require one to two dental check ups by your vet throughout their lifetime.

As your ferrets become elderly at around five to six years of age, they can be prone to a variety of forms of cancer. Often, these appear as lumps on their sides or around the armpits and groin. It is important that you feel over your ferrets’ body weekly for any changes and seek veterinary advice as soon as possible.

Your ferrets will become weaker on their back legs as they approach eight to ten. They may wobble more when they walk, and you may also notice that their hearing and eyesight reduces dramatically. As you start to notice these changes, make sure you adapt their enclosure to suit. Add extra warmth during the winter and bring all sleeping areas and activities down to one level to avoid injuries from falling. Also monitor their eating habits to check they are coping with hard food.

Microchipping your ferret is very important. Ferrets are keen escape artists, and many end up in rescue centres as unclaimed strays. They can travel several miles quite quickly, so it may not be your neighbour who finds them!

40% of the ferrets that arrive at our centres are strays. Woodgreen ferrets are microchipped so escapees can quickly be reunited with their owners. If you have homed your ferret from somewhere else, your vet can microchip them for a small fee.

An introduction to ferrets How to health-check small pets

Health-checking your small pets once a week is a good way to ensure that your pet remains happy and healthy.